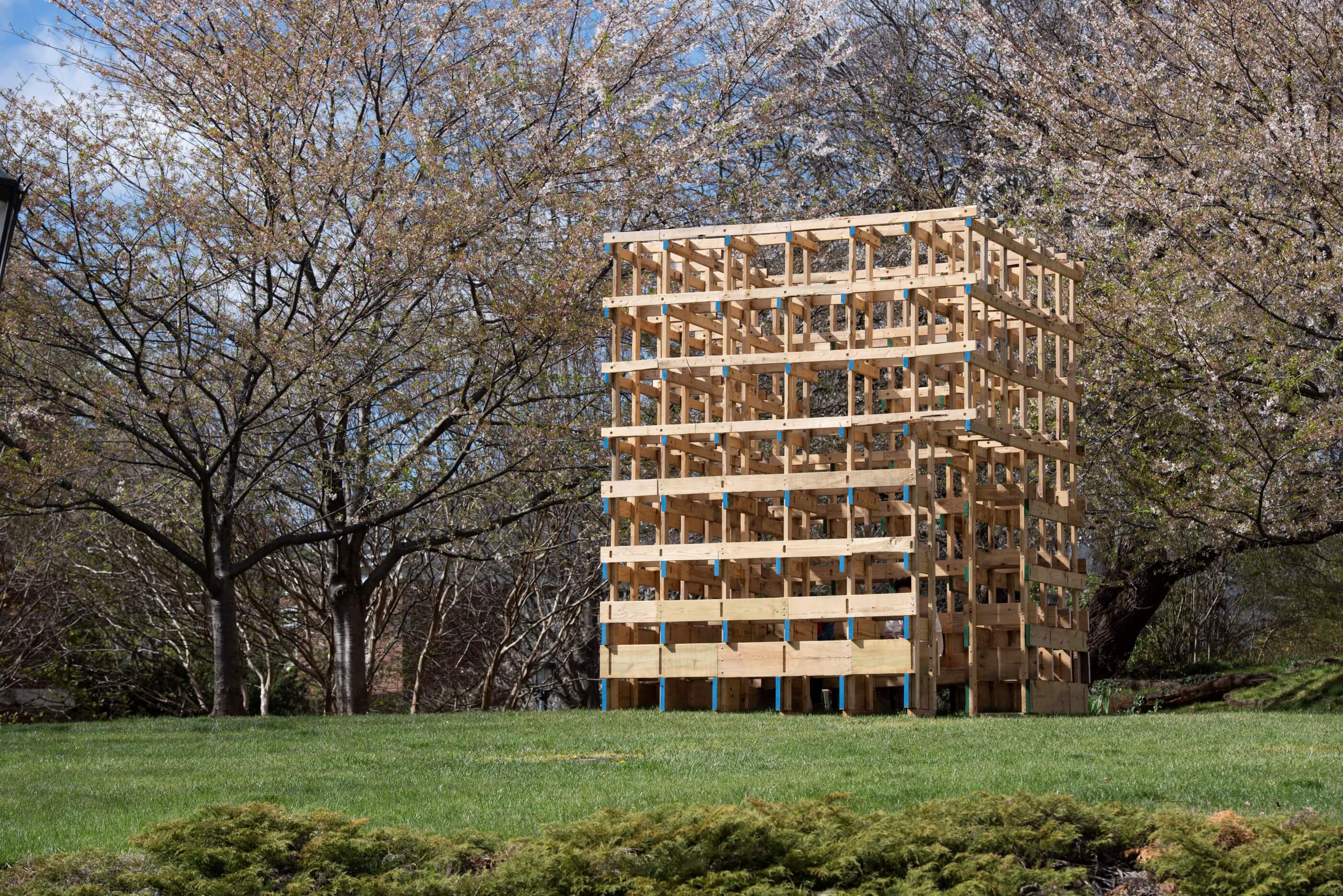 Like nature, technology is a loaded word, full of connotations and mental images of progress and human ingenuity. Traditionally understood, the two terms are perhaps at odds with each other; even the notion that humans have disturbed nature or the natural order still places humanity as an “other”, separate and above the rest of the world. In reality, the two exist in a symbiotic relationship with each other; there is no separation between the techno-human world and the natural world.

A groundbreaking exhibit at the University of Virginia School of Architecture called Exhibition on the construction of biomaterials exposes the overlap of the technological and the natural when it comes to architecture. Curated by Katie MacDonald and Kyle Schumann, assistant professors at the University of Virginia (UVA) and co-founders of the design firm After Architecturethe exhibit consists of five installations on building with biomaterials, organically-derived, rapidly renewable and carbon-sequestering building materials, such as wood and mycelium, on the school grounds in Charlottesville, as well as than a gallery exhibit documenting process work by featured designers.

“The purpose of the exhibition was to make this work very public,” Schumann said. A. “[We] wanted to show the public what these new materials, methods and manufacturing technologies looked like. For us, this new field of biomaterials as a potential way to address the construction industry’s contribution to the climate crisis [and] as an area that could produce new architectures is really exciting.

Each installation is a full-scale prototype, a model of how architecture might intervene in the life cycles of extracting, manufacturing, building and recycling materials and resources. The issues addressed by the exhibition require the support of extra-disciplinary agents. But so has the rapid adoption of cross-laminated timber (CLT) by the mainstream construction industry, which has been popularized following installations, provocations and ambitious projects like Jennifer Bonner’s. gabled houseSchumann and MacDonald are primarily interested in spatial, formal, and material strategies as a means of showcasing the possibilities of new biomaterials for architecture.

At the same time, “we are also borrowing techniques and technologies from these other industries,” MacDonald noted, citing the forestry industry’s use of 3D scanning technology to optimize machined production based on given characteristics. a singular log. In perhaps the most technologically intensive installation, Disconnect by HANNAH office appropriates this technology and robotically cuts scrolling ribbons of raw logs, transforming them into a new type of lightweight framing.

Two other installations also feature wood, albeit in more traditional forms. mix and match (picture above)by Somewhere Studiouses short lengths of scrap lumber of varying sizes from a housing estate the company designed in Dallas, Texas, bolted together into a three-dimensional frame. From wood to treeby Liz Galvez from Office for example, gives new meaning to reforestation, with a site-specific framework of wood cut from logs felled on land that harbors ecological and biological growth and degradation processes, eventually becoming dead wood and providing nutrients to the soil of the forest. Wood is a natural carbon sink, the most beneficial of the main structural materials when timbered responsibly, and incredibly versatile, leading to the diverse technological, material and aesthetic approaches of HANNAH Office, Somewhere Studio and Office, for example .

Another biomaterial less used in its architectural infancy featured in the exhibit is mycelium, the fungal “roots” from which mushrooms grow. Designers Benay Gürsoy Toykoç and Jonathan Dessi-Olive used the biodegradable mushroom for their installations, MycoCreate 2.0 and La Parete Funginarespectively. MycoCreate 2.0 is a branched arch structure composed of 64 cast-in-place mycelium-bearing blocks with a paper formwork in which the mycelium grows; computer simulations were run to find compression-only structural geometry. La Parete Fungina is a series of mycelium bricks that form an extract of a serpentine wall, inspired by the historic winding brick walls on UVA’s campus, but completely biodegradable and ironically taking on a snowy wood aesthetic.

Forming a spectrum of regional and technological approaches, the facilities are perhaps best viewed as a series of potentialities. Each individual installation has its interest and its successes: Log out the new manufacturing method has an odd relationship to stick framing while incorporating curved and distorted surface effects. mix and match combines a lovely filigree and a playful object from scrap material to wonderful effect. From wood to tree completely reconsiders a new architecture not for humanity, but for the non-human realm, while MycoCreate 2.0 discovers the new structural and spatial capacities of a biodegradable material. But what is even more significant is that, taken together, the five projects demonstrate the branching permutations possible with organic materials. From wood to mycelium, high tech to low tech, A-frame to vault, framing to masonry, the architectural applications of biomaterials are endless. MacDonald and Schumann saw this collective diversity as seeds in the public consciousness: “Building those things in the world that we consider very important [in] terms of what people can imagine is possible on an architectural or livable scale,” Schumann said A.

And while they each use different technologies to varying degrees, the installations also show that “natural” architecture is not opposed to “digital” architecture, just as the natural and the technological more broadly are not not distinct either. Architecture that seeks to respond to the building industry’s role in the current climate crisis is inherently digital. Digital workflows and iterative logics of biological evolution and computational design processes are integrated into each of the projects in different ways, through 3D scanning of logging, robotic milling, simulations, basic modeling of Rhino. the Exhibition on the construction of biomaterials showcases a new generation of architects using digital design and fabrication tools toward more than paneled freeform surfaces and mass customization. This generation designs radically, both architecturally and ethically, as if future generations of human and non-human life can benefit.

The exhibition ran until April 30, 2022 and each facility has a planned strategy for reuse, recycling or biodegradation. It was funded primarily by the Jefferson Trust and the Center for Global Inquiry & Innovation with additional funding from participating institutions.