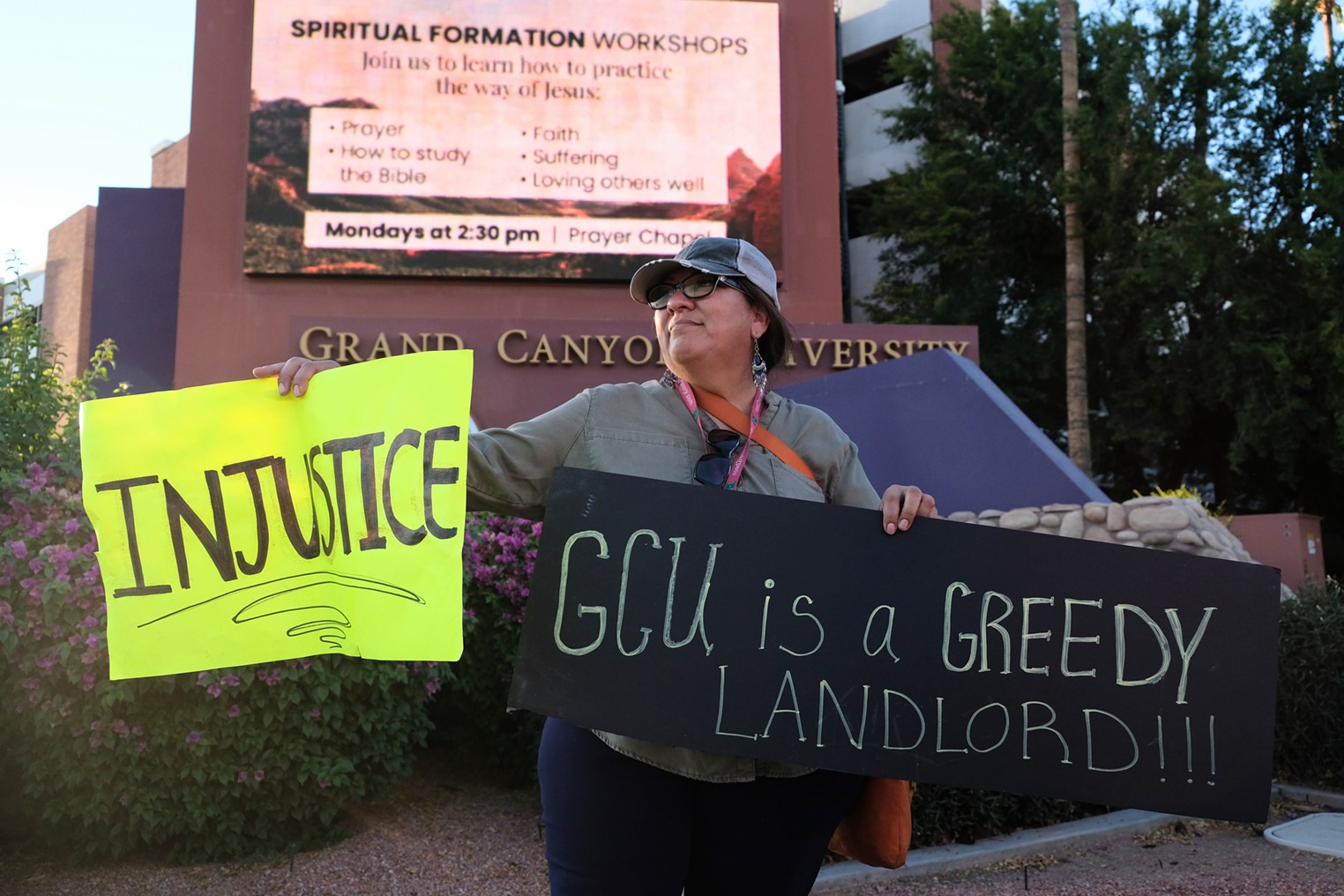 Months after Grand Canyon University first made public plans to evict longtime residents of a small west Phoenix mobile home park to make way for new development, the battle between trailer owners and school is not over yet.

On September 19, several dozen residents of the Periwinkle mobile home park, which is on 27th Avenue and Colter Street, gathered outside the university’s entrance gates on Camelback Road, waving signs and occasionally grouping in chants. For months, residents have been fighting evictions planned by the school, which owns the property. Most have lived in the trailer park for years, even decades, and said they had nowhere to go.

On April 29, the university notified residents that they had until October 30 to pack up and leave. After an initial outcry — which included lawmakers marching with residents on the streets — trailer owners made some concessions. GCU pushed back the eviction date to May 28 and promised help finding new housing.

Residents want the university to treat them fairly. TOS purchased the 4.65-acre property for $3.4 million in 2016. Grand Canyon Education, the publicly traded company that operates the Phoenix campus, earned $260 million in revenue last year, according to a file with the Securities and Exchange Commission.

Bob Romantic, a GCU spokesman, did not respond to a call or email from Phoenix New Times search for comment. In letters to the inhabitants, a copy of which new times examined, the university’s lawyers acknowledged that expulsions “can be a difficulty or an inconvenience”, but moved forward.

Alondra Ruiz Vazquez was among the protesters Monday night. Ruiz has lived in the park with her husband for nearly eight years, she said. Over the past few months, she has been bringing park residents together and lobbying to save her home. “It’s so emotional,” she said as passing cars honked their horns in support. “We love our community. We’ve known each other for so long.”

When Ruiz and others were told they had six months to leave, many didn’t even know GCU owned the property, residents said. They had only interacted with a property management company.

The school bought the park as part of an “aggressive” spending spree in the area, according a broker who worked on the trailer park deal. Despite worries about the university’s finances and disputed nonprofit status that dogged GCU for years, its enrollment has grown to a fast pace. The Periwinkle Mobile Home Park is just a small piece of the university plan for an expanded 400-acre campus.

Children who live in the mobile home park protested alongside their parents.

“They think we are trailer trash cans”

Sylvia Herrera, a longtime community organizer in Phoenix with the Barrio Defense Committee, helps organize residents and negotiate with GCU. She said new times that landlords want adequate compensation for the upheaval the evictions will cause. “We need a different model other than kicking people out,” she said.

Residents have access to state funds — for the most part, $7,500 per trailer — to move their homes to a new location. In reality, moving the structures is not an option for many residents. Some of their trailers are old and too flimsy to transport. Although trailers could be moved, many parks will not accept trailers beyond a certain age.

Some residents may face the abandonment of their home, an asset that has sometimes been passed down from generation to generation. If they leave their trailer at the park, they are limited to $1,875 in compensation from the state.

Ruiz recalled the anxiety that filled the park when the first notice was sent to residents in April. “We all knew we had no options,” she said. She expected many to be left homeless. Even now that the deadline has been extended, that anxiety hasn’t diminished, she said.

Gerald Suter, who braved the heat to come out in protest as he did in June, said he was worried about what will happen to him in May. The 83-year-old said that during a period when he was in primary school he and his family were homeless. For the past 28 years, however, Suter has lived peacefully in the Periwinkle Mobile Home Park. “I sleep. I dream of being on the street. I wake up,” he said.

“They think we’re trailer trash,” Suter commented. But the people of Periwinkle, he added, “are the best people you will ever meet”.

As apartment rents soar in the Phoenix metro area, mobile homes are often a rare and stable haven for low-income people. Residents who spoke with new times had lived in Pervenche Park for more than five years. Many had lived there for decades. Slowly, however, the development rush in Phoenix threatened these havens. Out-of-state investors, in some cases, have purchased mobile home parks across the state with plans to redevelop the land or convert the parks into vacation spots for RV tourists.

Since Periwinkle’s first protest in June, GCU said it would match residents with housing counselors from Trellis, a nonprofit that typically focuses on helping homeownership. The school also said in its August 30 letter that it would provide unspecified assistance.

GCU also offered free tutoring to children in Periwinkle Park for a year, which some residents found to be in bad taste. Ruiz noted that GCU had been a neighbor for years without offering educational resources to the community.

As the protest drew to a close, residents gathered to plan ahead. Before the end of the month, they will meet Trellis and GCU to negotiate. Yellow flyers that protesters handed out set out their demands: compensation for all park residents and a transition plan, outlined in a four-year contract. They also want any GCU multi-family development for the property to include affordable housing for low-income residents.