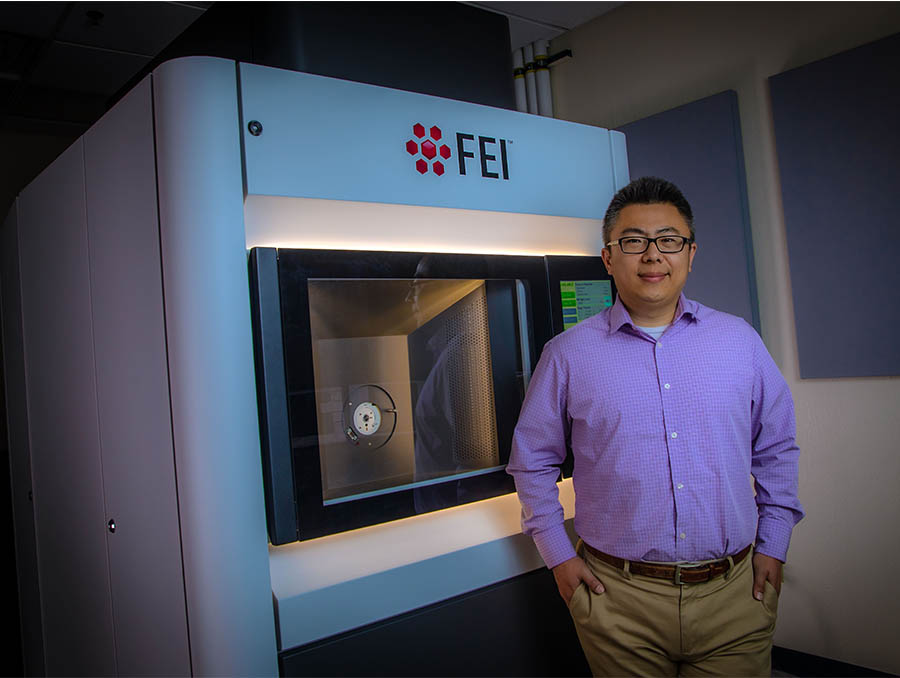 Assistant Professor of Chemical and Materials Engineering Yufeng Zheng will begin research in August to design new titanium alloys that are both high strength and ductile (the ability of materials to bend and stretch without breaking). His work will potentially impact the design of new lightweight advanced alloys for the aerospace and automotive industries, as well as the advancement of electron microscopy training for university students with hands-on experience.

The five-year project is funded by a $520,583 National Science Foundation CAREER award that Zheng received earlier this year. The CAREER Awards are the NSF’s most prestigious award recognizing early-career faculty who have the potential to serve as academic role models in research and education and to advance the mission of their department or organization. Zheng’s CAREER project, “Understanding the Role of Nanoprecipitates in Advanced Metastable Titanium Alloys,” aims to design new titanium alloys using a new design strategy called metastability engineering.

“I will use metastable titanium alloys (titanium combined with other metallic elements and at an intermediate energy stage) as an example to study critical issues in metastability engineering,” Zheng said.

Metastability engineering, as Zheng explains, is a new concept in designing advanced metal alloys that can overcome the trade-off between strength and ductility. Zheng specifically studies the internal connections between the configuration of atoms in the nanoscale region in titanium alloys and the responses of these alloys to different external environments (such as different temperatures or loading conditions) using microscopes. state-of-the-art electronics at the University.

It’s all about titanium alloys

Titanium alloys – light but strong, making them an ideal material for the aerospace and automotive industries – seem to be Zheng’s material of choice: he received another NSF grant in 2021 to research different titanium alloy compositions. , including the use of alloying elements that cost less than those currently used, as well as finding strategies for making titanium alloys at room temperature (another way to reduce manufacturing costs).

This time, Zheng is looking at titanium alloys as a way to study the new engineering concept of metastability. As he formulates it:

“In metastability engineering, the overall stability of alloys is tailored by adjusting their compositions to promote plastic deformation via strain-induced transformation as well as other hardening mechanisms, such as precipitation hardening and hardening in solid solution, and thus achieve the combination of excellent strength and ductility.

And that’s where nanoprecipitates come in — small precipitates that are undetectable to the human eye. the nanoscale O’ phase, a new phase discovered and reported by Zheng for the first time in the world. As Zheng says:

“These metastable nanoprecipitates can alter composition and structure in the local nanoscale region, and thus tailor local stability in metastable titanium alloys and allow activation of phase transformations that are spatially confined only to nanoscale metastable regions.”

What is not fully understood, Zheng said, is the intrinsic correlation between metastable nanoprecipitates, local stability, and activated confined-phase transformation and deformation in metastable titanium alloys.

“To fully understand the mechanisms that explain the high synergistic strength and ductility of metastable titanium alloys, there is a critical scientific need for a comprehensive understanding of the role of nanoprecipitates, like the O’ phase, in these alloys,” Zheng said. .

Zheng adds that the information gathered from this study of titanium alloys could be applied to other advanced metallic materials, such as metastable steels and high-entropy metastable alloys.

Electron microscopes play an important role in Zheng’s work: He is acting director of the College of Engineering’s Electron Microscopy and Microanalysis Facility, which houses the remote transmission electron microscope operating system and microscope portable desktop scanning electronics. These electron microscopes are essential in the field of materials science and engineering, allowing researchers to study the interrelationships between the processing, structure and properties of materials at the micro and nanoscale.

They are also important for students.

“Using microscopes in the classroom can help create a student-centered learning environment, stimulate students’ interest in materials science based on what they observe, and thus serve as important strategy for research and case-based teaching in materials science education,” Zheng says.

As part of his CAREER project, he plans to design new teaching modules in electron microscopy for graduate and undergraduate students at the University, as well as outreach activities for K-12 students. in the Reno community.

At the end of the five-year project, Zheng’s work may also have an impact on the industry. Titanium alloys with high strength and good ductility could improve light aircraft manufacturing for better fuel efficiency and CO reduction2 emissions, Zheng predicts, among other industrial applications.

Zheng credits his success to the support he received from the Department of Chemical and Materials Engineering, the College of Engineering and Research and Innovation, as well as his students, including doctoral students. student Dian Li; colleagues; collaborators and friends.