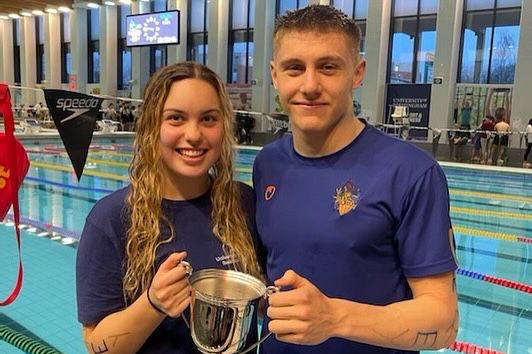 The BUSL is a new student-run league inspired by the NCAA’s double meet format. The league was previously known as the National University Development League (NUDL) and was founded by Jack Corston when he was a student at the University of Sheffield in 2019. Last year, Ewan Taylor, swimmer from the University of Surrey, collaborated with Corston and developed the BUSL.

The first season of the BUSL was structured and separated into three phases. During the first phase which ran from October to December, thirteen conferences from four teams each played each other in three localized doubles matches. In the second phase, the four teams gathered at one venue to face off in an “arena-league style” conference championship gala. Each team was allowed to enter a non-scoring team in order to invite more swimmers to race. For the third phase, the 13 winning teams of their conference championship met at the University of Birmingham for the national final. The BUSL included three generic teams – those with the next highest scores – in order to accommodate 16 teams in total. Here, the team that finishes with the most points is the winner of the BUSL.

The fixture schedule in the BUSL is very different from that of the British Universities and Sports Colleges (BUCS). Compared to the large number of competitions in BUSL, BUCS offers only three championship competitions which become more selective consecutively. The season opens with the Short Course Championships which are open to all BUCS swimmers. Long course championships track and limit individual team entries to two swimmers per event and three entries for each competitor. For the end of season team championships, only 18 swimmers per team participate. Additionally, teams are separated into three divisions during Team Champs: Championship, Trophy, and Shield.

The Championship division features the highest level of competition, with Trophy being a lower level and Shield being the lowest level. BUCS determines these divisions by evaluating the results of the previous year and using the promotion and relegation system. 20 teams are assigned to each division.

The three meetings took place at the same establishment in Sheffield during the months of November, February and April. Since BUCS athletes receive very little funding, they must cover some, if not all, of the costs of transportation, hotel, food, and entry to competitions. Although BUCS partnered with Speedo and used the support to ease financial pressure, swimmers still had to pay £16.75 (around $21) per individual entry.

The financial responsibilities that come with BUCS are different from those of BUSL. The league’s mission is to promote inclusivity, affordability and more competitive opportunities that also encourage fun and friendly competition. Taylor pointed out that little or no profit would be made from arranging meetings. In fact, most of the costs were exclusive to the team registration fees for the national final. With spending cuts, more swimmers were interested in competing. Taylor noted that there were BUCS swimmers who competed in both BUCS and BUSL. The schools still encouraged swimmers who were not selected for the BUCS to participate in the BUSL.

BUCS is aware of the existence of BUSL and there is no rivalry between the two. The schedule of meetings for the BUSL has been created to avoid any scheduling conflicts. Taylor’s hope for the BUSL is to one day merge with BUCS swimming so that it replicates the structure of the NCAA.

Currently, Taylor is communicating with other swim brands to gain more supporters, which will reduce pool rental and cover entry fees. Although the national final received merchandise from companies such as Red Bull, Arena and Mailsports, Taylor hopes to increase BUSL’s exposure and remove any financial burden.

Check the main website run by Taylor and Corston to find BUSL results.