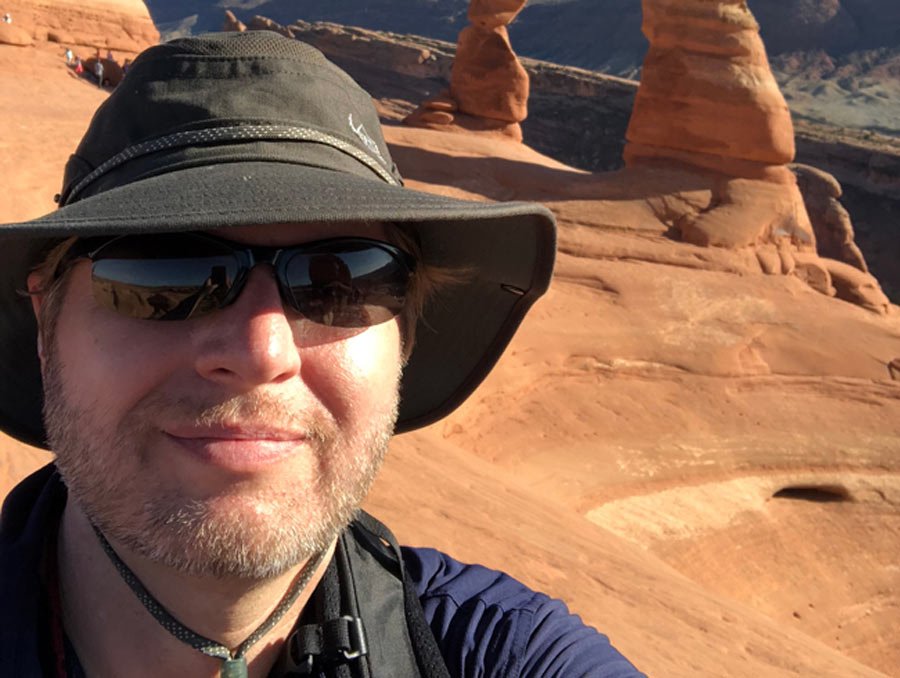 Garrett Vice graduated from the University in 2008 with his Masters in Geology. While in college, Vice worked as a graduate research assistant at the Nevada Bureau of Mines and Geology (NBMG), where he studied geothermal systems in Nevada. He has remained involved with the University since graduation serving on the Mackay School of Earth Sciences and Engineering Board of Trustees since 2015. He is the Chair of the Mackay’s Reputation and Engagement Committee School. He is also steward of an endowment created by many alumni that supports undergraduate research.

Since earning his master’s degree, Vice has worked at ExxonMobil as a senior geoscientist. He is one of the company’s experts in structural and waterproofing, where he identifies ways to deal with hydrocarbon leaks. He advises on projects around the world, on every continent except Antarctica. He also helps identify prospects and teaches courses within ExxonMobil.

In 2021, Vice was named one of Wolf Pack Way’s first alumni. Each of the Wolf Pack Way alumni has demonstrated successful careers and exceptional dedication to their work and community.

What does it mean to you to be a Wolf Pack Way alumnus?

I love this university, I loved my stay here. I like to promote this school. It means a lot to me to be included in the Wolf Pack Way, it’s quite an honor.

What is your most memorable experience at the University?

We had a tightly knit geology group that included people from hydrology, NMBG, the geology department, and the seismic department. We met every Thursday evening to catch up and discuss what we had done with classes and work. It is a memory that I really appreciated. I also attended all the football matches I was able to attend. They were so much fun. Even with the blizzards rolling in, we didn’t care. We were there in the student section having a great time. And the basketball games, I went too. Just enjoying the college lifestyle.

What person or resource on campus has been most instrumental in helping you succeed?

That’s one thing I like to say about UNR, that the support network was fantastic. I was at NBMG and that’s where my adviser, Jim Faulds, was. I had a lot of support from people there, including John Bell, Chris Henry and Jim Faulds. There were other people like Steve Wesnousky who, as a teacher, was always very supportive of me. Various people in the Mackay building were allowing us to come in and use that space. Most importantly, the groups of geology students have been incredible support, discussing new ideas and bouncing ideas off each other and making plans to get out in the field together. It’s quite incredible, the network I’ve built here, both from a friendly and professional point of view. I’m good friends with a lot of people I went to school with and we talk regularly. You really make lifelong friends here.

What is the most important thing you learned in college that set you on the path to success?

As a graduate student at NUR, there is a support network here. There is also a desire to be independent. Learning that independence and learning how to network and talk to others were essential skills. I think that was the really important part, beyond going to class and learning about geology. It went way beyond that. It was learning these life skills that I took into the world. I use these skills in geology, but it’s so important to learn how to communicate. I learned how to communicate with different people to get results for my thesis work and to help other people as well. We all helped each other. Again, it comes down to the fact that you are developing such a tight-knit community here.

Is there a faculty member or mentor at the University that you were particularly close to?

Jim Faulds, my adviser, I was very close to him. I wouldn’t be where I am without him. It really helped me visualize geology. Steve Wesnousky was by far my favorite teacher I’ve ever had. He always said to me, and I always use it when advising people or presenting, “Garrett, tell me a story,” because geology is a series of steps. There is a story to tell. There are so many people, there are a lot of people at the University who are passionate about education, and I felt like they were passionate about my education. John Bell, Melissa Bell and other people who I hold in very high regard and have been very supportive of me, it’s just a great group of people.