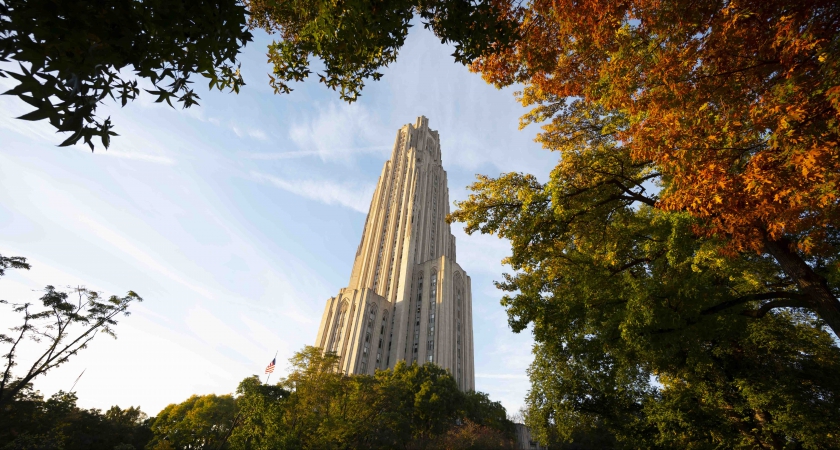 It’s been just over a year since Pitt’s faculty voted to be represented by the United Steelworkers union. Since then, the new union and Pitt’s administration have been working on a collective bargaining agreement, with the bargaining committee issuing periodic updates and the administration mostly remaining silent.

In recent weeks, this largely behind-the-scenes process has taken place more in the open with a protest by some members of the faculty union during a bargaining session on October 27 and a pointed rebuke of the union by University Senate officers at this week-long Faculty Assembly meeting about the role of shared governance going forward and the perceived lack of transparency.

There are frustrations everywhere.

Tyler Bickford, who heads the union’s bargaining committee, said the protest arose out of the union’s frustration with the pace of negotiations, particularly over job security issues.

“The administration has told us that these job security issues are also a priority for them to move forward in negotiations, but we really haven’t seen evidence of that in their proposals or at the bargaining table,” he said. Bickford said.

The problem is the insecurity of many professors who have short-term contracts as they wait for renewals every year or semester, he said. In Pitt’s system, most contracts are renewed on September 1, although classes usually start a week earlier, which sometimes leaves these professors without access to email, logins, library resources and even classrooms before classes start.

Bickford said last week’s rally involved about 150 faculty standing outside the Posvar Hall negotiating room as the administration team entered, and then faculty marched silently through the room. He said after that they reached an agreement in principle on “a facilities and support article, and that would ensure that we all have access to the resources we need to do our jobs”.

On the broader issue of job security, Bickford said the union has proposed having longer contract lengths and contracts that automatically renew. “If professors are doing their job and they have work to do, they should just keep doing their job without having to reapply,” he said.

“The administration has told us that these job security issues are also a priority for them to move forward in negotiations, but we really haven’t seen evidence of that in their proposals or at the bargaining table,” he said. he declared. “So I think it was really good for a broader faculty to have the chance to communicate directly with the administration’s negotiating team, to show them that this is something that people are paying attention to and on which they really want to progress.”

Senate President Robin Kear and Vice President Kris Kanthak, who are both part of the bargaining unit, told the Faculty Assembly they were concerned the protest would be announced to everyone. in the unit.

“I find it opaque and exclusive,” Kear said. “Union meetings of the elected leadership, the Council of Representatives, are not open and have no published minutes. There have been no union meetings to update members on the progress of the bargaining committee, nor is that transparent to me.

Kanthak said she was one of the first to support the union because she thought the administration could be more transparent, but she now fears the union is no longer transparent about what it is doing. in his name.

“I thought (the union) would be a force for transparency, and I was absolutely wrong,” she said. “I understand the irony that I spoke loud and clear in favor of a union when it excluded my colleagues from medical school. And now that it excludes me too, all of a sudden I learned my lesson. And so to my colleagues in medical school here and everywhere else, I apologize. I was wrong.”

Bickford noted that they sent regular updates on the progress of the bargaining unit, but he chose not to explain why not all members were notified of the protest.

The union rally last week was just one of the issues that Kear and other Senate officials spoke to at the Faculty Assembly.

Kear said she was deeply concerned about the effect of partial faculty unionization on shared governance. She and others noted that the medical school – which has nearly 2,500 people – is not part of the bargaining unit, which includes about 3,335 professors. This leaves a large part of the faculty who will not be covered by a collective agreement but who will be represented in the shared governance.

“I have seen that a great division has been introduced into our faculty by the creation of members of the bargaining unit and those classified as managers,” she said. “I see this division impacting the work of Senate committees and even the work of my own faculty management unit in the library system. Faculty who are managers find it problematic to participate in discussions that may or may not relate to union issues or union updates at faculty meetings. This impacts the ability to have open discussions in our committees, with administrators or professors who are managers who feel they cannot participate.

This issue came to a head this week when the provost’s office contacted Kear to say that after discussion with the union, a Faculty Assembly agenda item on Personnel Act policy Inter-Governmental (IPA) should be abolished and administration officials could not attend the general assembly to discuss policy.

Kear said the issue of Pitt administrators being unable to speak in Senate committees has also come up in faculty affairs and budget policy. She noted that IPA policy and other issues, such as the inclusion of diversity and community-engaged scholarship in tenure and promotion decisions, have made their way through the shared governance process and are now blocked because of the union. She believes that if the administration and the union want to change a policy for the bargaining unit, it should be done after the transition to shared governance.

“Preserving our robust system of shared governance is a priority for me,” Kear said. “Taking the IPA deal off the agenda, because of an agreement between the administration and the union, erodes that system. It is the president of the University Senate who sets the agenda and includes the priorities of the Senate committee from which this one originates. Neither the administration nor the union has the power to add or remove an item from our agenda. It undermines our system of shared governance and treats our existing apparatus as an ancillary structure, as opposed to something central to the functioning of the University.

The issue, Washington said, is direct bargaining, such as whether management can talk to bargaining unit members about mandatory bargaining issues without the union getting involved.

“Shared governance is an important part of what we do at this university,” Washington said. “That’s sort of the foundation. It’s built into everything we do. Throughout this negotiation, we acted as if everything was continuing and that the process of shared governance was not going to be part of the (union’s) vision of what was a direct negotiation. It was our understanding.

Bickford repeatedly emphasized in an interview that the union is the exclusive representative of the bargaining unit on mandatory issues of wages, benefits and working conditions. The problem is that the issue of “terms and conditions of work” is not clearly defined. It would not specifically comment on API policy. Kear said she believes the union “wants to go far beyond the mandatory topics of bargaining and into broader areas that fall within our shared governance jurisdiction.”

“I fear that the faculty union wants to replace and usurp shared governance as it has existed at Pitt for 81 years,” she continued. “The teachers’ union does not speak for all the people represented by shared governance. He doesn’t even speak for the entire PItt faculty. We do, and that’s what we were elected to do.

Bickford said there are all kinds of areas that work through shared governance other than wages, benefits and working conditions, and the union is in discussions with the administration on how shared governance can work alongside the union.

Washington said the administration doesn’t necessarily agree with everything the union thinks is a mandatory bargaining issue. But the administration is walking a fine line because the union has threatened to impose unfair workloads if it participates in direct negotiations on issues the union classifies as falling within the bargaining agreement.

“A solid conversation between shared governance and administration has always been something that I’ve found very helpful,” she said. “But certainly during this interim period it’s a bit more difficult for us if the union takes the position that we can’t talk.”

“I think there should be multiple channels for people to express what’s important to them,” Kear said in an interview after the meeting. “And if they can do it through their union, great, and if they want to do it through shared governance, great, we’re happy to have them there.” There are strengths in both ways of participating.

Do you have a story idea or a short story to share? To share with the University Times.