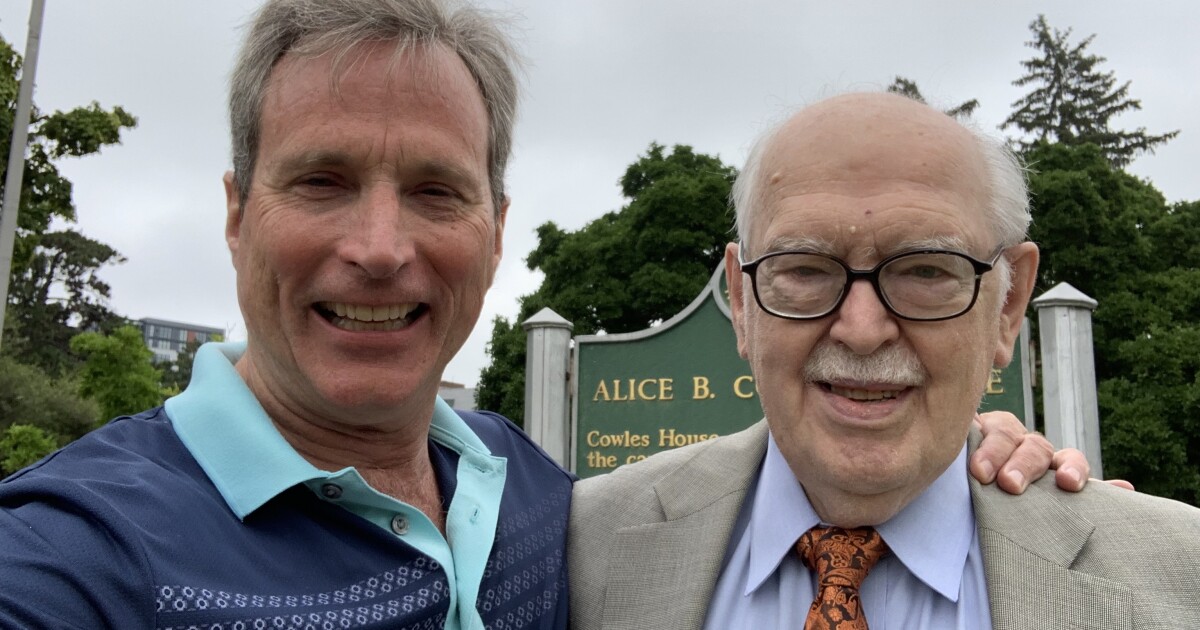 “She was so dedicated to Safe Place and so determined to make it work. Of course, now, after all these decades, it has worked very well. She always had an idea, like when we got here, the Beaumont tower bells weren’t ringing, and they hadn’t rung in about a year. She said, ‘What is this? The Beaumont tower bells must ring. In no time, the bells rang, and they have rung ever since. Safe Place and the Beaumont Tower bells, as well as the signs at campus entrances were some of his accomplishments.

“When we got here, for some reason the signs coming into campus were a bunch of wireframe structures and they looked pretty bad. Joanne never wanted things to look bad. They are now stone and permanent, and they look really good. They’ve been like this since about 1994, and it was Joanne going, ‘What is this?'”

McPherson talks about growing up in West Michigan and always knowing he would attend MSU, like all of his siblings. And he says “MSU opened up the world to me.” Then a stint in the Peace Corps inspired his life’s work on international issues. He describes having worked in both the Ford and Reagan White Houses. He was working for Bank of America in San Francisco after the Reagan years, and that’s when the presidency of MSU opened up.

“Leading Michigan State was a dream I never really expected to have the opportunity to do. You can imagine what my seven siblings living in West Michigan thought. At that time, unfortunately, my father and my mother had passed away. I often think, and it certainly was at the time, how sad it was that they weren’t there because, for my dad in particular, it would have been special.

McPherson talks about some of his proudest accomplishments, like bringing the Detroit College of Law to MSU and starting the conversations that led to MSU’s presence on Grand Rapids’ Medical Mile.

“The leader of this effort was Judge Dick Suhrheinrich. Without Dick Suhrheinrich, we wouldn’t have a law school. He is truly a great man with enormous abilities. We created this law school. First, some thought it might be in Detroit, which wasn’t optimal. There were some issues and eventually it came here as an independent school.

“They had a real identity that they intended to protect, which I thought was reasonable. The agreement I had with them was that I would never push for there to be a closer affiliation. They may decide they wanted to, and that may be appropriate at some point, but it won’t be MSU pushing a closer affiliation. Before I left, they came to me and said, “We want a closer affiliation,” and now, after several years, it’s called Michigan State University College of Law.

“The idea of ​​medical school came to fruition in the years after I left. In my mind, the key decision and the key meeting – there were several; something like this has several key meetings – was a meeting I had with Rich DeVos in the Grand Rapids airport hangar where I talked about how we wanted to do this. Basically, DeVos said, “That’s a good idea.” and it wouldn’t have happened without DeVos’ significant key intervention in the years following his deployment.

Talk about APLU and its mission.

“We are very aggressive and active in Washington on appropriations for colleges, and we have a deep commitment to student graduation, equity, and minority students having the same graduation rate percentages as college students. of the majority. I am pleased that the current MSU President, Stanley, sits on the APLU Board of Directors.

“Sam is a guy that we at APLU have always seen as a guy we could go to to get things done. During the pandemic, his medical expertise has been invaluable. Presidents of this organization from across the country get together, and Sam was someone who could serve with real expertise and talk about the issues that we all had. Sam was always a go-to guy. For him, coming to the state of Michigan was just outstanding for the state of Michigan and for him.

What concerns you about the future of higher education? What do you hope for? What keeps you up at night? What are the challenges and opportunities moving forward?

“We must continue to increase our graduation rates and reduce the time it takes to graduate. We need to graduate more students and do it in less time. Of course, there are cost considerations. Legislatures provide a significantly lower percentage of the cost than before. Pell grant money is useful, and we lobbied for more Pell money.

“There’s this whole set of equity and graduation and cost issues that, of course, I could devote your entire program to because I’m so immersed in those that are very concerning. On the other hand, there are some successes. I looked at ALPU numbers over the last 10 years under Department of Education data, and our Hispanic students over the last 10 years have increased by 70%. The numbers for black students haven’t changed much. The Hispanic student population has grown.

“These are the types of issues that we need to continue to tackle and make progress on now. We know better than we do how to train graduate students. We have the technology. I know these are important issues for the State of Michigan. Graduation rates here are quite high, but I know there is a commitment to increase them.

What do you hope your legacy will be as president of MSU, or don’t you even worry about that sort of thing?

“Well, I think if you worry too much, it’s a mistake. There are certainly key elements that I am very proud of. To me, ultimately what a college presidency should be is the type of education students receive. Michigan State happily and successfully educates many students, so I’m starting there.

“The Law School is important, as is the start of work on the Grand Rapids Medical School. This place is so complex. There are so many things that I have learned and been a part of. As I have said many times, every project has many fathers and mothers and many contributors, so I was proud to lead the state of Michigan during those years.

MSU Today airs Saturdays at 5 p.m. and Sundays at 5 a.m. on WKAR News/Talk and Sundays at 8 p.m. on 760 WJR. Find “MSU Today with Russ White” on Spotify, Apple Podcasts and wherever you get your show.