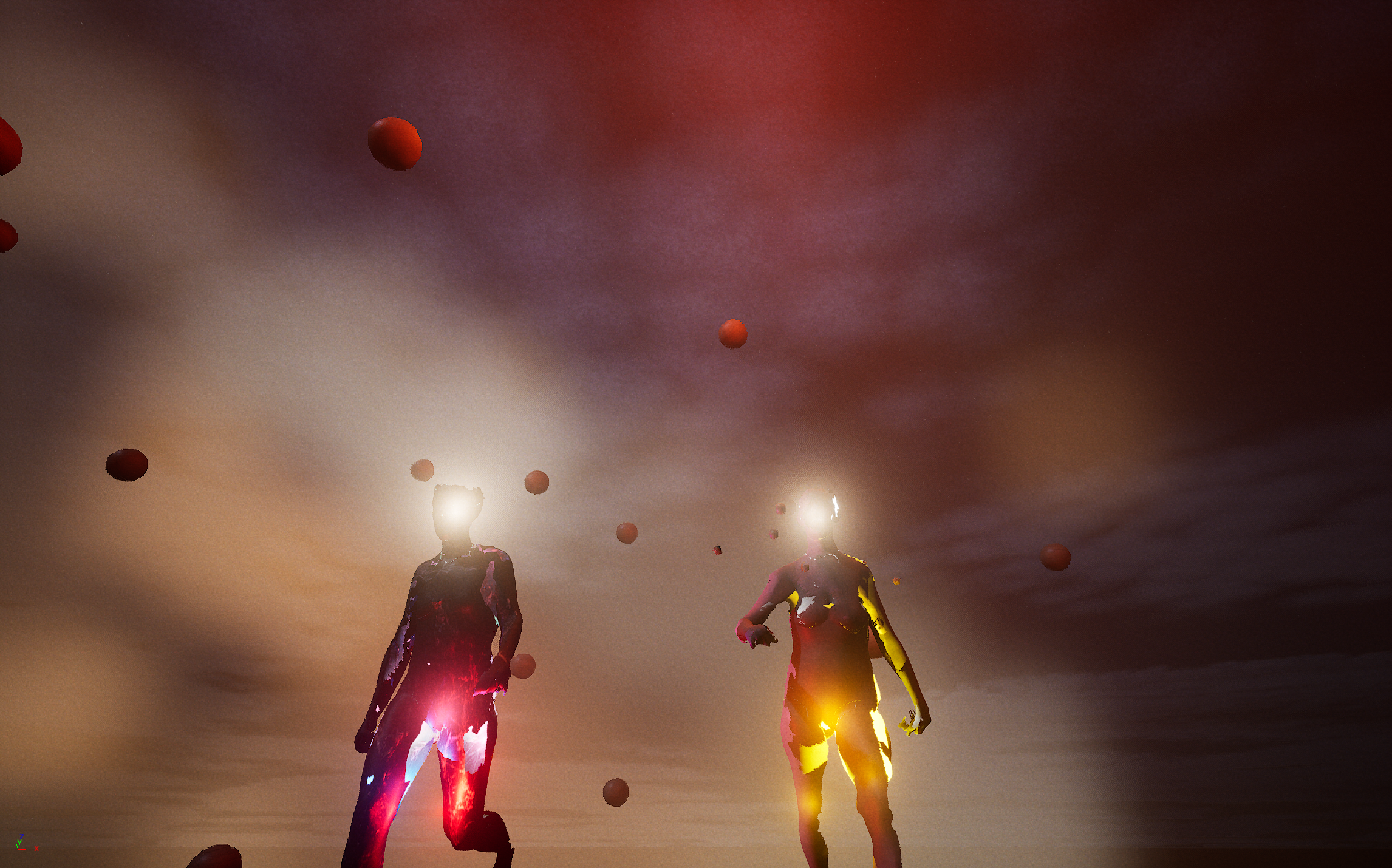 “I think what audiences can be sure to expect is a very engaging event that has a lot of immersive qualities; is highly experimental; is sound, kinetic and visual; and touches both our most primal, innate being and our potential in an uncertain future,” Fleming said.

Produced through a partnership between the Lied Center for Performing Arts and the Johnny Carson Center for Emerging Media Arts, “The Wilds” is a mixed reality performance experience where movement instantly becomes music as emerging technology empowers dancers to create an immersive journey of sound, light and visual media in real time. Part mythology and part utopian vision, “The Wilds” merges live dancers with motion capture technology and real-time animation, inspiring a deep bond of shared collective experience.

“The Wilds” is made possible, in part, by a grant from the Hixson-Lied Endowment.

“I think what we’re seeing right now is this sort of acceleration of humanity in virtual space,” Fleming said. “We work with the tension point of what it means to enter a digital space, what does it mean to be in this body, this innate body of sensors, and what does it mean to reflect this outward? How does the connection to each other and our unified belonging to the earth exist right now? »

Lied Center executive director Bill Stephan said the Lied Center has been a developer and supporter of new works for decades.

“We consider this to be a core part of our mission both as the premier national arts broadcaster and as part of the University of Nebraska-Lincoln,” Stephan said. “Since the Johnny Carson Center for Emerging Media Arts opened on the ONE campus in 2019, we worked to find a meaningful way to collaborate, and when EMA Professor Jesse Fleming began sharing his work putting live dancers into a real-time mixed reality environment, we had found our project.

Fleming is the founding director of Awareness-Based Design (ATM) Laboratory at the Carson Center. He traces the origins of “The Wilds” back to 2017, when he and his partner moved from Los Angeles to Northern California.

“It was the first time we’d left a big city in 25 years,” Fleming said. “And I had been thinking a lot during THE how to start creating structures for emerging media to be informed by nature so that we are not in this hall of mirrors creating self-replicating technology technology because it is collapsing civilization.

His gallery, Five Car Garage in Los Angeles, asked him to prepare a proposal for an art fair in San Francisco for a live performance.

“That’s when I created the first draft of this project and reached out to Laurel and Lewis, who were both longtime collaborators,” Fleming said. “That art fair exhibit didn’t pan out, but the proposal felt alive to all of us.”

During the Covid pandemic, the three communicated on the Internet and through Zoom to continue developing the project. Last year, Fleming was part of a three-class collaboration with Susan Ourada’s Dance Composition Class, Jinku Kim’s Media Sound Design Class, and Fleming’s Real-Time Creativity Class, which featured a series of live mixed reality performances at the Carson Center’s Open Studios event in December.

Eventually, Fleming secured support from the Lied Center for “The Wilds”. Fleming and his co-collaborators continued to develop the work through quarterly residencies.

“I think the pieces just came together,” Fleming said.

Fleming received help at ONE from Assistant Theater Professor Michelle Harvey, who handles the lighting design. He also received support from Hewlett Packard for the technology used in the creation of “The Wilds” and worked with Max Urbany of Harvard University on a machine learning collaboration to create animations used in the introduction and the conclusion of the performance. He also thanks Shane Bolan, technical manager and developer of his ATM laboratory.

“Shane has been part of my creative lab/studio as a lead tech since I opened it in 2019,” Fleming said. “He’s a brilliant coder and he’s very open to building and learning things that have never been done before. He’s been an integral collaborator in almost every project that has come out of ATM. This is very true for “The Wilds”. What we do is often developed by large teams. In our case, it was mostly undergraduate research assistants, Shane and me. »

Fleming is thrilled with the premiere of “The Wilds.”

“I think it feels like new territory for me,” he said. “For me, personally, as one of the co-creators, my driving and underlying interest remains focused on how we can use technology to expand the limits of our innate perception. much of our behavior stems from what we believe to be true. But we know, for example, that space is not invisible and that what happens in one place in space affects another. But we don’t feel it, see it, or hear it in a way that we understand. My passion for this type of work is to foster the capacity for human consciousness to grow. To live fully is to understand interconnectedness.Deep down, everyone wants to feel a connection, and sometimes it’s hard because we don’t realize how connected we already are.

Fleming said it was natural for him to have the premiere at Lincoln.

“I always seem to work close to home, at least initially, wherever I am,” he said. “I tend to just focus on whatever’s here right now, and I’m very relationship-based, so I’m going to work with whoever’s sort of in the room, so to speak. It feels like a natural extension of the support given to the project, since the start of my laboratory, throughout this period of research and thanks to my ability to collaborate with dance and Jinku Kim.

After the performance at the Lied Center, “The Wilds” will travel to Middlebury College in Vermont and then to Los Angeles.

“I appreciate the Lied Center wanting to take a chance on ‘The Wilds’,” Fleming said. “It may be good that we all experiment together.”