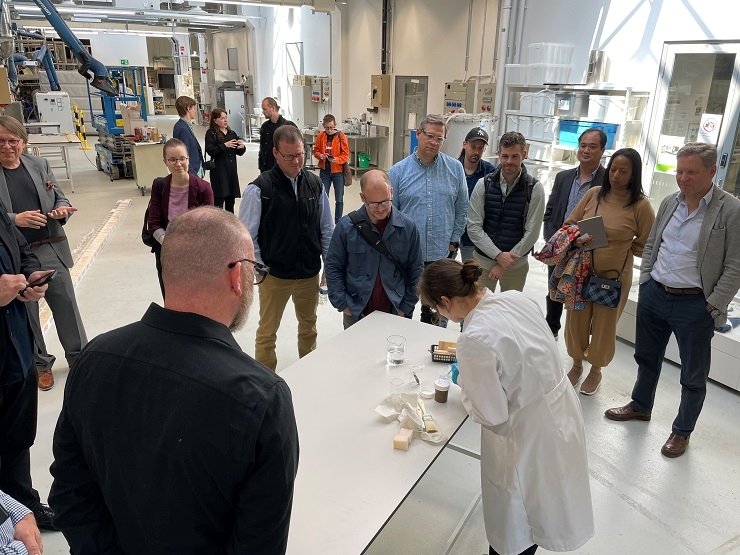 The Fay Jones School of Architecture and Design and World Trade Center Arkansas joined an Arkansas business delegation to Finland in June to experience first-hand the Nordic country’s thriving timber industry and its sustainable forestry practices.

ROGERS – Finland’s emergence as a world leader in forest management and timber exports can serve as a roadmap for Arkansas, which in many ways resembles the European nation when it comes to dependence on with respect to the forestry, wood and wood products industries.

The World Trade Center Arkansas, in partnership with the Fay Jones School of Architecture and Design at the University of Arkansas, learned first-hand about Finland’s thriving timber industry and the country’s sustainable forestry practices, as well as as its intensive culture of wood products research and innovation, during a 10 day trade mission to the Nordic nation in June 2022.

Led by Peter MacKeith, Dean of the Fay Jones School and a 1990 Fulbright Finland Scholar, the 10-person delegation from Arkansas met with many Finnish business and government leaders, including its Ministry of Agriculture and Human Resources. Forests and the Ministry of the Environment, to learn how Finland has become a 21st century “forestry superpower”, with national programs in sustainable forest management, materials research and development, and neutral circular economy in carbon.

“Our 10 days in Finland were an intensive introduction to the Finnish forest economy,” said MacKeith, “each day providing thought-provoking insights into the nation’s holistic and collaborative approach to converting its ‘green gold’ into a sustainable and responsible product. , productive future for all its citizens. The combined efforts of national government, business and industry sectors, creative and scientific academic disciplines, forestry associations and forest land owners are a model of how a small nation (or state) can harness its prime natural and renewable resource for the greater good.”

“We strive to broaden the understanding of how sustainably managed forests and wood products are part of the solution to climate change, and also to promote the many sustainable and long-term economic opportunities available through industries. forestry and wood products,” Gibson said. .

“Collaboration across multiple sectors and stakeholders is vital, and a strategic partnership between Finland and Arkansas could help foster the development of new and expanding markets for forest products essential to everyday life.”

John Folan, head of the architecture department and professor at the Fay Jones School, noted that Arkansas and Finland share a sense of ingenuity, which is evidenced by academic research.

“The business delegation tangibly illustrated how this ingenuity can be harnessed across disciplines to create economic opportunity through innovation – from nano to super scale,” Folan said. “One area where this has been highlighted is the industry-relevant applied research work carried out by universities. Partnerships between industry and academia are resulting in remarkable breakthroughs of great environmental benefit. ”

Folan also said Arkansas could benefit from fully realizing the environmental and economic value of its natural resources like their Finnish counterparts.

“The use of wood construction products is well known in the architecture and construction industry, but the use of by-products and secondary content is less so for the general public”, a- he declared.

“The opportunity presented in understanding the benefits of nanotechnology that can positively impact sectors such as the textile and modular energy industries is inspiring.”

About 12% of Arkansas’ forest land is industrial, but the impact on the economy is enormous. The lumber industry supported 27,702 jobs and accounted for $1.8 billion in revenue in 2021, according to data from the Arkansas Center for Forest Business.

As Finland depends on its forest for similar economic output, the country has been proactive in integrating the industry into its economic development strategy while striving to ensure sustainability. Finland has developed a program to increase the use of wood in buildings while assessing their carbon footprint. At the same time, the country is updating its forest management strategy from 2025 to 2035.

The ethic of sustainability is ingrained in the Finnish timber industry, which struck a chord with Ben Baldwin, project manager for Nabholz Construction Co. at Rogers.

“In many ways, probably because their economy and environment are more affected by it, I found their massive wood construction philosophy and initiatives to be more advanced than in (the United States).

Jason Wright, architect and partner at Modus Studio in Fayetteville, said his first time in Finland was transformative.

“I can honestly say my expectations were exceeded and I’m still excited about the experience,” he said.

“It was obvious to me that there was an opportunity for collaboration between Arkansas and Finland – through economic development, architecture and design, lessons in sustainability…the list goes on. looking forward to a return trip to continue to strengthen the bond between our two cultures, and to continue the work started during my first visit.”

Gibson, Baldwin and Wright were among several Arkansas construction officials, architects, engineers and business leaders making up the trade delegation, which also included several University of Arkansas officials. The other members of the delegation were:

Welcher, who is also an adjunct professor in the U of A’s civil engineering department, said he plans to meet with his Finnish counterparts to get advice on incorporating wood into construction projects.

“There are far fewer boundaries limiting the incorporation of advanced wood technologies into the design and construction of buildings in Arkansas (and the country as a whole) than originally thought,” he said. declared.

“I am looking to interface with my Finnish structural engineering peers to learn more about how they have addressed certain structural design and performance constraints that are not addressed in our currently adopted codes and standards.”

Dean MacKeith summarized the success and potential benefits of this summer trade mission.

“The focus on forests, land use, manufacturing, design and the built environment of this delegation will inform future exchanges envisioned with Finland,” MacKeith said.

“At the same time, there are many opportunities for mutually beneficial educational, economic and cultural exchanges between Arkansas and Finland, and the university is uniquely positioned to be a catalyst in this relationship.”

As a business link for the natural state, WTC Arkansas strives to expand commerce and increase Arkansas exports by connecting Arkansas businesses to the world through international trade services. The center is part of the University of Arkansas and serves as the business promotion arm for AEDC.