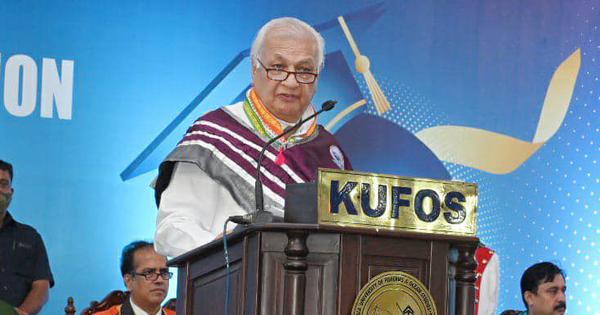 The Pinarayi Vijayan-led government on Thursday changed the rules of Kerala Kalamandalam, a renowned university for art and culture, to remove Governor Arif Mohammed Khan as chancellor, PTI reported.

The move came amid the Left Democratic Front government’s growing confrontation with Khan over the administration of state universities. The state cabinet decided to ask Khan to issue an ordinance removing him from his position as sole chancellor of universities, so that renowned academicians could be appointed to that post.

On Thursday evening, the government issued an order amending the rules of Kerala Kalamandalam to facilitate the appointment of an eminent person of their choice in the field of arts and culture as chancellor.

“The governance system and management structure of Kerala Kalamandalam shall be in accordance with the decision of the Government of Kerala,” the order said.

The state government amended clause 4.25.0 of the rules and introduced the provision that the chancellor of the university would be the “chancellor appointed by the sponsoring body”.

The governance system and management structure will be decided by the Kerala government, the ordinance says, adding that rules and ordinances to that effect will be issued as the occasion arises.

According to the ordinance, the Chancellor’s term of office is five years from the date of taking office. The person is re-eligible for an additional term. But, the government said no one would be eligible to serve as Chancellor of Kerala Kalamandalam at the age of 75.

The amended rules also stated that “in the Chancellor’s absence or during his ability to act, the Pro Chancellor shall exercise all the powers and perform all the duties of the Chancellor”.

On October 23, a controversy erupted after Khan ordered the vice-chancellors of nine public universities to tender their resignations, citing a Supreme Court verdict. The Vice-Chancellors challenged the order in the High Court.

On October 24, the High Court allowed the Vice-Chancellors to remain in office until a final order on the matter was passed by the Governor based on show cause notices.

At another hearing on Tuesday, the court ordered Khan not to act against the vice-chancellors to whom he had sent show cause notices until the judge hears the case.

Chief Minister Pinarayi Vijayan had accused Khan of being a tool of the Rashtriya Swayamsevak Sangh and alleged that the governor was waging a war with the intention of destroying universities in the state.

The Communist Party of India (Marxist), which is the main constituent of the ruling Left Democratic Alliance, had also alleged that the governor’s action was a ‘conspiracy by Sangh Parivar to weaken Kerala’s resistance against the saffronization of the sector. education”.