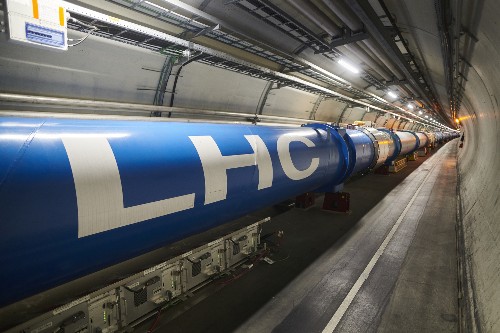 The University of Bristol’s Particle Physics Group has joined the global physics community in welcoming the announcement that the world famous Large Hadron Collider (LHC) at CERN has returned to service today.

After three years of shutdown for maintenance and planned upgrades, the world’s most powerful particle accelerator has been reignited and will soon begin another period of cutting-edge physics.

The LHC, on the Franco-Swiss border near Geneva, was shut down in 2018 to allow scientists and engineers around the world to make it even more powerful.

Last month, the University received £2.38 million from the Science and Technology Facilities Council (STFC) to support Bristol Particle Physics Group research projects at CERN and other international laboratories, including the search for dark matter and the search for signs of new phenomena in the decays of subatomic particles

Professor Joel Goldstein from the Bristol School of Physics said: “We in the Bristol Particle Physics group are very excited about the restart of the LHC. Analysis of previous LHC data has revealed intriguing discrepancies, including anomalous results in detailed studies of B meson decay by Bristol researchers.

“The new runtime will more than double the available data set, allowing us to make even more precise measurements and hopefully establish whether these discrepancies are the first signs of new physics or simply statistical fluctuations.The new data will also increase the sensitivity of our continued search for other signs of new physics, such as exotic Higgs boson decays.

This new energy frontier will allow researchers to tackle ever more complex questions about the laws of nature and to better understand the building blocks of matter.

As part of the international effort, British teams, including that in Bristol, carried out a series of vital works to improve the performance of each of the LHC’s four main instruments.

UK contributions to the upgrade amount to over £25 million, funded by the Science and Technology Facilities Council (STFC).

Science Minister George Freeman said: “The Large Hadron Collider at CERN in Geneva is one of the most important laboratories in the world enabling scientists to understand the deepest questions of the atomic structure of our universe and the origins of human life.

“The UK is proud to have been a founding partner of CERN and the key role British physicists and engineers have played in the design and construction of key parts for the Large Hadron Collider experiments.

“Through our leading role in global projects of this scale, the UK is building on a role as a global scientific superpower and helping to retain the highest caliber of talented scientists in the UK.”

Mike Lamont, Director of Accelerators and Technology at CERN, said: “Machinery and facilities underwent major upgrades during the second long shutdown of the CERN accelerator complex.

“The LHC itself has undergone an extensive consolidation program and will now operate at even higher energy and, thanks to major improvements in the injector complex, it will provide much more data to the LHC experiments. modernized.”

STFC Executive Chairman and particle physicist, Professor Mark Thomson, said: “The UK continues to have a strong and fruitful relationship with CERN. Our scientists and engineers have played a central role in contributing to major upgrades, paving the way for exciting UK-led research into the LHC’s most powerful beams.

“It will never cease to amaze me how our scientists and engineers, with their incredible skills and expertise, can continue to improve these state-of-the-art facilities using ever more innovative technologies.

“The global scientific community will now be eagerly awaiting the results of the new campaign, which will probe some of the recent hints of new physics seen at the LHC and elsewhere.”